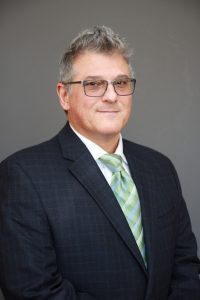 At Stewart Richardson we regularly recognize our outstanding court reporters for helping us provide the highest quality of deposition services. This month, we chose John Baker from our Indianapolis office to be in the spotlight.

“He is the epitome of customer service and often bends over backwards to care for our clients and our staff, ” said Stewart Richardson COO Rose Wallis.

John has been an invaluable court reporter with Stewart Richardson since 1990, and we are thrilled to have him as part of our team.

“I truly believe John doesn’t know a stranger; he remembers names and faces with amazing clarity and always has a story to tell,” said Rose.

John was born in Chicago, grew up in its western suburbs, and attended high school and college in Illinois. Although he had a lifetime interest in radio and television, it was a girlfriend and her friends who challenged him to go to court reporting school at McCormick Junior College. So he did and, after moving to Indy, he worked with several agencies, including Stewart Reporting back in June 1990 when it was Jim Stewart and Jackie Fagan.

Get to know more about John, his time as a court reporter, and his experiences working for Stewart Richardson by reading our conversation below!

What do you like most about working with Stewart Richardson & Associates?

I’d say the technology. I remember a time when we had to bring our jobs down to the office on a 3.5 disk and can remember when Don Grey, Tom Alexander, and myself worked at my home as they developed a way for the reporters to be able to modem their jobs to the office. Things have come a long way since then!

What is one of your proudest moments as a court reporter?

I have done many things as a reporter — deps, hearings, arbitrations, a murder trial, projects at the NCAA headquarters, the Colts, the Pacers, Indianapolis Motor Speedway, American Legion conventions both locally and nationally — so it’s hard to pick one. If I had to say, I’d say going to and finishing court reporting school and being one of the top in my class, Phi Beta Kappa, et cetera. Almost everyone I knew said, “There’s no way you can do this.”

Rose Wallis, COO, described you in a few words as “entertaining, flexible, resourceful, helpful, and friendly.” What three words would you use to describe Stewart Richardson & Associates?

What do you like about working in the Indianapolis area?

I grew up in the surrounding Chicago area and, after having lived here since November 1988, I would never go back. Indy is nicer, smaller, friendlier, cheaper.

What is one interesting thing about court reporting that you don’t think many people know?

I always tell people writing as a reporter is more like playing the piano than typing on a typewriter. And the things I’ve heard, I mean I could write a book.

What’s one piece of advice you’d give to someone looking to become a court reporter?

Talk to several people who have been in court reporting for a while as it’s definitely not for everyone!! 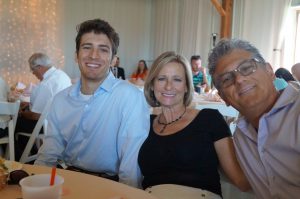 Tell us a bit about your family!

Myself and Julie were just married and had a small wedding reception for us and our kids Friday, December 22, 2017, at Fogo de Chaö, and an attorney I’ve know over the years actually did the vows. I have a 24-year-old son, Cody, who recently graduated from IU Bloomington; and Julie has three — two daughters and a son, Mindy, Colleen, and Trent. Her oldest is a married mom of three little girls; Colleen and her recent husband live in California and have acted in various indie films, commercials, and music videos, both are accomplished singers and musicians (Colleen wrote and sang a song for us at the wedding); and her son is single and works downtown.

What is one interesting fact about yourself?

Geez. Well, I’m pretty sure most people don’t realize I like to cook. I’m always trying some new dish, and my wife loves the fact that most days when she comes home from work — she’s a painter and runs a cleaning business — I’ve got dinner going and, when I hear the garage door go up, I’ll make her a rum and Diet Coke. Lol. We’ve both been married before, so I’m always saying either, “Happy wife, happy life,” or, “Your wish is my command.”

What are your favorite hobbies/activities?

When my son was grade school/high school age and involved in a lot of sports, I was really into photography; and we both did Kempo karate for a few years although I hurt my elbow and he went on to get a black belt. Recently I spent several years being a total fitness buff: Yoga, Pilates, Zumba, weightlifting, food and dieting, but stopped. So I’m ramping up to get back into it all… I promise, Julie. Honest!

Are you interested in scheduling a deposition with John or one of our other great court reporters? Try using our online deposition scheduling tool, today!

Four of Our Favorite Moments From 2017