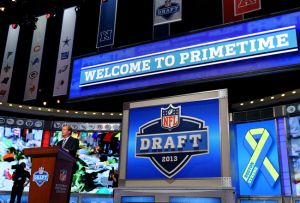 The National Football League held its 78th annual “Player Selection Meeting” at Radio City Music Hall last Thursday.  Headlined by a mediocre group of offensive linemen, and featuring the worst quarterback class in memory, this year’s draft lacked both elite talent and exciting moments. Even Jon Gruden, who has frequently been criticized for his overly complimentary commentary, rarely had something positive to say about the prospects.

These factors shifted my Thursday television viewing priority to the 80’s cult classic “Roadhouse.” I caught only bits and pieces of the draft during commercial breaks (I also flipped over during that whole sequence where Patrick Swayze, Sam Elliot, and that ER doctor go for breakfast after that wicked bar fight. I mean there aren’t any roundhouses for like 11 minutes.  Not interested in that.).

So if I extrapolate from what I did see, it seems that the draft’s top storylines included Manti Teo’s confrontation with the fact that, for the second time this year, there was no one out there actually in love with him, and the precarious position several teams were put in due to the lack of quarterbacking talent this year. Additionally, we learned that Rex Ryan still seems to be calling the shots for the Jets.

Also worth noting are the sagas of Matt Barkley and Tyrann “honey badger” Mathieu. Once a top 10 draft prospect, USC quarterback Matt Barkley plummeted into to the 4th round after a senior session plagued by, well, losing. Barkley’s return to Southern California in an attempt to address his “unfinished business” likely sucked out $10,000,000 from his rookie contract. However, Tyrann Mathieu was a bigger loser as his ongoing Cheech & Chong impersonation probably cost the playmaking DB / return man much more than that.

To recap the Thursday’s most important events: Patrick Swayze, along with his mullet and high wasted, pleated khakis, was able to liberate the small Missouri town that he now calls home for the diabolical Brad Wesley and his criminal reign. Swayze and his allies also thwarted local law enforcement, and the viewer is left with the idea that Swayze and co. will not face criminal charges for their tomfoolery. Rest in peace, Patrick Swayze; rest in peace.

As always Rob’s Sports Desk is brought to you by Stewart Richardson Depositions Services with locations in Indianapolis, Fort Wayne, Evansville and Valparaiso.

Steno A to Z: Discover If Court Reporting Is Right for You!